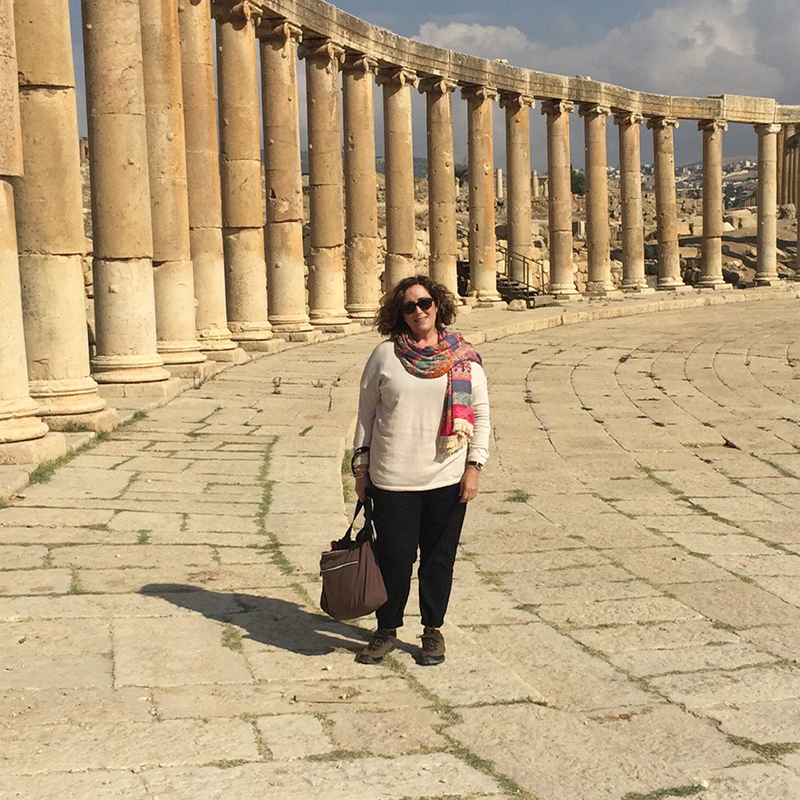 Jennie travels to Jordan with Scenic

In November last year I was excited to join a group of travel agents on a luxury 8-day Scenic tour to Jordan. Having visited Egypt a few years ago I thought Jordan could not equal the wonders of Egypt but I was wrong, although it’s a smaller country it also offers some incredible sights.

I flew with Etihad Airways to Amman via Abu Dhabi. On arrival in Amman, our group was met and transferred to the Fairmont Amman, a stunning modern hotel. Sightseeing highlights in Amman included a visit to the ancient city of Jerash, inhabited since the Bronze Age and the best-preserved Roman city outside Italy. After entering through Hadrian’s Arch, we explored the impressive ruins of temples, theatres, public squares and fountains. Jerash was hidden under centuries of sand before being slowly excavated over the past 70 years. In the hippodrome we witnessed an entertaining re-enactment of a Roman chariot race and soldiers in battle. Later that day we visited the Royal Automobile Museum which showcases a rare and extensive private collection of vehicles, outlining the life of the Jordanian Royal family over the years.

Leaving Amman, we continued on to Petra in our comfortable coach. Enroute we enjoyed a day of Biblical sightseeing which included Bethany Beyond the Jordan, visiting the place on the Jordan river where it is believed Jesus was baptized. We also saw the memorial of Moses at Mount Nebo, presumed to be his burial site, and at Madaba we saw the famous mosaic map of the Holy Land.

In Petra all Scenic guests stayed at the Movenpick Resort, which is located directly at the entrance of the UNESCO World Heritage-listed site of Petra. Visiting the ancient “Red Rose City” is a fascinating experience. The inhabitants were the Nabataeans, who settled in southern Jordan more than 2000 years ago. It’s a 2 km walk through a narrow gorge called the Siq, before you reach the magnificent Treasury carved out of pink stone - there is much more to see as you continue on - tombs, temples and houses carved into pink sandstone cliffs. There is a smaller Treasury accessed by 900 steps, up and back, and other walks and hikes offering amazing views of the city. Petra has been voted as the second of the new ‘Modern Wonders of the World’. It was hidden in the mountains of Jordan for thousands of years until rediscovered in 1812. Petra by Night is worth the walk in the evening, the Treasury is lit by 1500 candles and later flood lights whilst Bedouin music plays, a magical experience.

Our next stop was Wadi Rum, the dramatic desert landscapes, huge rock formations and sandstone mountains of this area were a highlight of the trip for me and I can understand why so many movies have been filmed here. We stayed at the Sun City Camp in the luxurious Martian Tents, this was a unique experience. These dome-like tents are 40 square metres in size with a modern bathroom, air conditioning and heating, and a personal terrace, perfect for star gazing up into the desert night skies.

That afternoon, camel riding was offered and later we drove in four-wheel drive vehicles out into the dunes for our Scenic Enrich experience. Having drinks and nibbles whilst watching the sun go down in such a remote beautiful area, another unforgettable moment on this trip. After a dinner of chicken cooked, for many hours in underground ovens, we were then treated to traditional Jordanian music and folk dancing around the fire.

Enroute to the Dead Sea we stopped at the port of Aqaba on the Red Sea, Jordan’s only coastal city, where many cruise ships dock. Our final accommodation was the Hilton Dead Sea, an impressive luxury hotel with views across the tranquil sea to Israel. The hotel opened in 2017 and every room has seaviews, it is located at the lowest point on earth at more than 430 metres below sea level. There is direct beach access for those wishing to float in the healing mineral properties of the sea, perhaps after being slathered in therapeutic rich, black mud. The mud is cosmetically treated and provided by the hotel. The Dead Sea is 304 metres deep, the deepest hypersaline lake in the world. It is 10 times as salty as the ocean and it’s impossible to sink, the high salt content makes you very buoyant, a strange feeling.

This hotel also has an amazing Spa with many treatments on offer and everyone on my tour stocked up on a myriad of Dead Sea products to bring home. Jordan has great shopping - popular things to buy are scarves and wraps, clothing, bags, good quality jewellery, hand-painted bowls, vases and ceramics of all kinds.

Weather-wise the best time to visit Jordan is Spring between March and May, and Autumn between September and November when the temperatures are not too hot or too cold. The summer months, particularly July and August, can be unbearably hot and humid, especially in the Jordan Valley.

If a Scenic Tour to Jordan or Egypt is on your bucket list, or if you are interested in any other Scenic destination, please contact me at our Malvern office. I would love to assist in making your dream a reality.